You are here: WorldGen

This is an old site, and has been moved to https://www.notasnark.net/worldgen/

WorldGen is a world creation tool designed to generate a living universe of stars and planets for use in a Science Fiction RPG similar to Traveller. When it was originally written over ten years ago, it was designed to directly read UWP data and simply expand it to include multiple planets per star system. The latest version is currently focused on building systems from scratch, with no concerns as to the UWP. However, the style and flavour will be similar to the Imperium, though not identical.

Specifically, as the example below shows, the amount of information generated for a world is considerably more than can be encoded in a UWP. 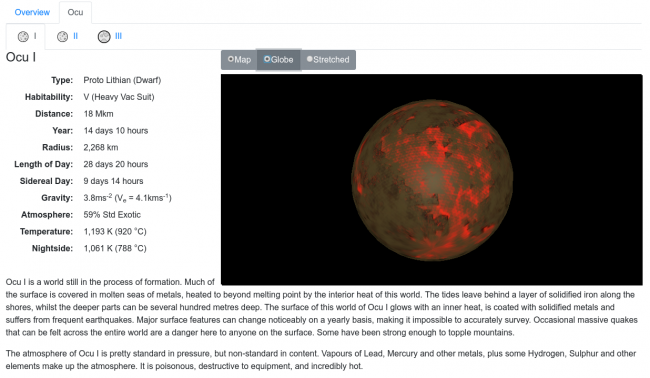 Each world has its own unique surface map, physical characteristics and text description. These are procedurally generated according to the type of the world. World types follow a detailed classification scheme, to allow for a wide variety of world types.

The current version, code named Atomic Apocalypse, is focused on getting the basics of star system and planet generation completed. For now, the vast majority of worlds are unpopulated, and the focus of the second milestone is to concentrate on civilisations.

The aim is create a living universe, so it's goal is to track the movement of individual ships, trade goods and information across a universe of millions of worlds. As such, all world generation is optimised for quantity and diversity rather than a handful of perfectly detailed worlds.

At the largest scale, the galaxy is split into Sectors, each of which is 32 parsecs wide and 40 parsecs tall. Sectors are numbered from a central location, spiralling out in a clockwise fashion. The galaxy is two dimensional for reasons of simplicity.

A star system normally consists of one or more stars plus a system of planets. It is possible for a system to consist only of a single rogue planet, or several stars with dozens of planets, moons and asteroid belts.

Planets make up the bulk of the data. They are classified according to the Planetary Classification List, which determines the broad characteristics of the planet.

Except where otherwise noted, content on this wiki is licensed under the following license: CC Attribution-Share Alike 4.0 International